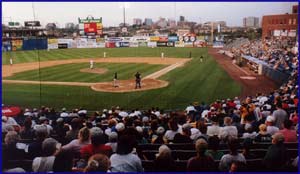 The Delaware Stadium Corporation (DSC} owns and oversees Judy Johnson Field at Daniel S. Frawley Stadium. The stadium was built by the DSC in 1993 with funds supplied by the State of Delaware and the City of Wilmington.

After many attempts, a site within the City was identified – the former Dravo shipyard on Wilmington’s south side. Adjacent to I-95, the site afforded visibility and accessibility. In an industrial area, though, the site presented many site development challenges. Agreement was close, but more funding would be necessary to construct the stadium on an inner city parcel. A total of $6.1 million dollars of public funds ($3.9 million from the State of Delaware and $2.2 million from the City of Wilmington) were allocated for the acquisition of land the construction of a stadium.

The Delaware Stadium Corporation was formed to develop and operate the Stadium. After lengthy negotiations, a lease was signed with a group led by Peter Kirk of Maryland Baseball, the then-owners of the Frederick and Hagerstown, Maryland, minor league affiliates of the Baltimore Orioles. Kirk’s group agreed to operate the stadium for multipurpose events and to acquire a minor league team to play in the stadium. The Peninsula franchise of the Carolina League was acquired – the deal was done, professional baseball was coming back to Delaware for the first time since the 1950’s.

It was the fall of 1992. The land was acquired. The team was identified. The ownership was in place. All that was needed was…a stadium. Minker Construction was selected to build the stadium and work commenced. A deadline of April 16, 1993 was selected – opening day for the new stadium.

While the contractors worked through the winter, the Delaware Stadium Corporation worked to select a name for the new stadium. Delaware had many residents who had been involved in professional baseball, but only one member (at the time) of the Baseball Hall of Fame in Cooperstown – Judy Johnson, a star third baseman in the Negro Leagues. In order to honor Johnson, as well as the other prominent Delawareans who excelled in professional baseball, the stadium was named Judy Johnson Field at Legends Stadium. For information on the career of Judy Johnson, click here.

The Wilmington Blue Rocks were set to play on Judy Johnson Field at Legends Stadium. The first season was a smashing success, as the Blue Rocks won the Carolina League title, led by future major leaguers Michael Tucker and John Lieber.

Unfortunately, one of the prime movers behind the stadium, Mayor Dan Frawley, died suddenly in February of 1994. The stadium was renamed to honor him – Judy Johnson Field at Daniel S. Frawley Stadium.

The mission of the DSC is to provide a first-class multi-purpose sports facility for the use and enjoyment of the people of the State of Delaware and surrounding communities.

The DSC leases the stadium to the Wilmington Blue Rocks minor league baseball team and the Delaware Sports Museum and Hall of Fame. Under the terms of the lease, the Blue Rocks also operate and maintain the stadium facility on a day-to-day basis. In addition to the Blue Rocks, the stadium has hosted hundreds of community events including college and amateur baseball, football and soccer games.

Stadium expansion was completed for the 2001 season with funds supplied primarily by the State of Delaware, with an assist from the Delaware Stadium Corporation, the Wilmington Blue Rocks and the Delaware Sports Museum and Hall of Fame.

Included in the stadium expansion is the new home for The Delaware Sports Museum and Hall of Fame, which opened in 2002 at the stadium. The DSC was formed by the State and City in 1992 and is governed by a Board of Directors comprised of State and City officials and members of the general public.

As Frawley Stadium enters into its 25th season in 2017, many repairs and upgrades were accomplished. In 2016, the State of Delaware appropriated funds to the DSC to be utilized for the immediate repairs and upgrades necessary to ensure the long term future of the Stadium and minor league baseball in Delaware. For the 2016 season new seats were assembled throughout the entire stadium. For the 2017 season the concourse at both levels were completely restored. In addition to
these two major renovations many upgrades and repairs were done throughout the stadium.